FIGHT CAMP 360 Inside the Super Six on Blu-ray 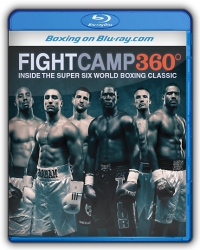 The series focuses a powerful spotlight on the groundbreaking tournament from the kickoff press conference in July 2009 through the Final tournament bout in December 2011.

NOTE:   This is the documentary build up shows that looks at all the fighters in the Super Six World Boxing Classic, NOT the fights themselves.