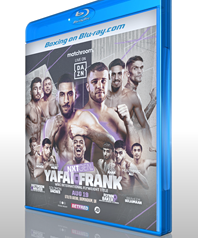 Boxingonbluray.com is currently the only supplier of top quality boxing on Blu-ray. For the first time you can now enjoy boxing in High Definition / Ultra High Definition, with crystal clear visuals and sound.


We are temporarily closed over the festive period, we will be re-opening on 31st January 2020, apologies for any inconvenience.


Fights are added frequently, see our latest fights for the most recent additions, fights are usually added within a few days of the event.


Our complete fight list has all our currently available fights, if you can't find what your looking for, please contact us, and we'll do our best to try and source it for you.


Anthony Joshua vs. Andy Ruiz Jr. II for the WBA, IBF, and WBO Heavyweight championships, held on December 7, 2019, at the Diriyah Arena, Diriyah, Saudi Arabia. (includes Dillian Whyte vs. Mariusz Wach, and Michael Hunter vs. Alexander Povetkin). Also available as a 2 disc version including all the build up and undercard bouts.


Deontay Wilder vs. Luis Ortiz II for the WBC Heavyweight championship, held on November 23, 2019, at the MGM Grand, Las Vegas, Nevada, USA. (includes Eduardo Ramirez vs. Leduan Barthelemy, Brandon Figueroa vs. Julio Ceja, and Leo Santa Cruz vs. Miguel Flores). Also available as a 2 disc edition including all the build up.